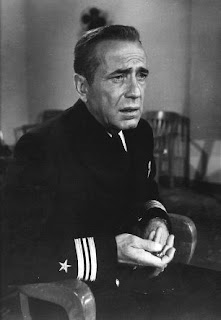 With all that said, I am immensely pissed off at the Huffington Post for the unbelievable amount of class they have shown. If you can't bring yourself to click the link, that's understandable. To summarize, Chris Kelly is comparing McCain to Captain Queeg of Herman Wouk's novel The Caine Mutiny. Reading his column leads one to conclude:

Having read the novel multiple times myself(mostly on deployment, which I will wager that Mr. Kelly has not done either), it's very clear who the author thinks is "at fault" in the mutiny. Hint: It's the mutineers. Specifically, the cerebral proto-Berkeley type Keefer, who has egged the XO on to relieve Queeg. Greenwald, the lawyer who got Maryk off(and who is quoted in Kelly's column) says:

I'm coming to Old Yellowstain. Coming to him. See, while I was studying law 'n' old Keefer here was waiting for his play for the Theatre Guild, and Willie here was on the playing fields of Prinshton, all that time this birds we call regulars--these stuffy stupid Prussians, in the Navy and Army were manning guns. Course they weren't doing it to save my mom from Hitler, they were doing it for the dough, like everybody else does what they do. Question is, in the last analysis--last analysis--, what do you do for dough? Old Yellowstain, for dough, was standing guard on this fat dumb and happy country of ours. Meantime me, I was advancing my little free non-Prussian life for dough. Of course we figured in those days, only fools go into the armed service. Bad pay, no millionaire future, and you can't call your mind or body your own. Not for sensitive Intellectuals. So when all hell broke loose and the Germans started running out of soap and figured, well, it's time to come over and melt old Mrs. Greenwald---who's gonna stop them? Not her boy Barney. Can't stop a Nazi with a lawbook. So I dropped the lawbooks and learned how to fly. Stout fellow. Meantime, and it took a year and a half before I was any good, who was keeping Mama out of the soap disg? Captain Queeg.

Greenwald goes on to say how much he regrets torpedoing Queeg's career, how making a fool out of a Freudian psychiatrist is like shooting a fish in a barrel, and how he deserved better.

Mr. Kelly, I don't like Senator McCain. But he deserves better than cheap shots from an illiterate draft-dodger(which is how I mentally think of ALL folks who haven't served) who seems to be very skilled at guessing Herman Wouk's wants and needs, despite not correctly reading the intent of The Caine Mutiny
Posted by GruntyGinMan at 2:23 PM