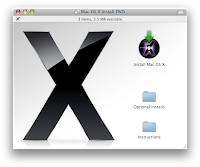 I was listening to this week's NPR Technology podcast and the first story was about passwords. Specifically, about idiots who had trouble with their passwords. There was a montage of idiots telling their stories about what idiots they were with passwords.

That right there is a good example of the difference between Apple users and PC users. First off, PCs have a much higher "support" industry than Apple does, so someone somewhere could have resolved the issue, even if it came down to moving a jumper on a motherboard or enclosing the HDD and pulling the information off that way. Or they could have formatted the HDD and reload the OS. Certainly there was no reason to throw away a laptop because of password difficulties.

The guys tone also really pissed me off, as if he thought it was funny. Hell, I wish I had enough cash to throw away a Apple Laptop after some password problems!

I might be a little narrowminded in this case, as I've spent such a long time in government(either as a sailor or a contractor) that I'm used to keeping track of multiple passwords...but man, seriously? I honestly think this is not that hard.
Posted by GruntyGinMan at 6:54 PM

If I didn't know you better, I'd think you were making the story up! to toss a computer just cuz of pw problems is ridiculous!