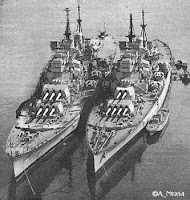 Fans of German military prowess make much of the so-called “Z-plan” that the Kriegsmarine embarked upon in the winter of '38-39. The story goes that Admiral Raeder proposed to Hitler two plans: The first was a short term warplan that only included surface ships either commissioned or in advance stages of construction and submarines. The second was the more ambitious Z-plan, which would center around a massive capital ship program. The Z-plan would not be ready until 1944, and Hitler promised Raeder that the fleet would not be needed until 1946. The Z-plan was selected, with 6 H-class BBs and three new BCs projected for '44-'45. By 1948 the Kriegsmarine would have grown even larger in size, and been a terror to the RN. If only Hitler had held off invading !

As my mother likes to say, “If 'ifs' and 'buts' were fruits and nuts we'd all have a Merry Christmas.”

The likelihood of WW2 in starting later seems to be extremely low. But let's say that, for whatever reason, did not start it's campaign of conquest until 1944, what happens then?

For one, the RN would have been in a much better position then they had in 1939. The massive building program across the North Sea would not have gone unanswered, and it seems likely that at the very least all 5 KGVs and the 4 planned Lion class BBs would have been completed(or in the case of the Lions the first hull or two would have been finished with the others in advanced stages of construction). The Mighty 'Ood would have undergone it's much needed modernization, and the QEs not modernized in the original timeline would have been as well. The RN Battleline would have been more formidable, not less, with a delayed start to a European war.

Across the Channel, the FN re-arming proceeds apace, with the fine Richelieu class BBs entering service, as well as a new aircraft carrier that will provide much needed air cover for the fleet(the old Bearn being unsuited for modern operations). The only concerns are whether or not will be able to pull off the same rapid conquest that they did originally(a success more due to British ineptitude than French) and whether the Italians would enter the war on the German side.

In the one BC has been completed and sent to the Dutch East Indies where, after the fall of the it will perform convoy escort duties in the Indian Ocean and remain a valuable asset in the coming war with .

In the Baltic new Soviet BBs have begun to enter service, further complicating the correlation of forces.

In the new North Carolinas and , on their own, compare favorably with the Kriegsmairne H-class vessels. Once the 6 are entered into the equation, with the imminent arrival of the -class heavy battleships, the USN Battleline becomes the most impressive on the planet. With the addition of the Alaska-class BCs and Essex-class CVs the USN becomes an unstoppable force, with more capital ships, not less, than in the original timeline.

This all assumes, of course, that is able to organize it's war industries in any reasonable fashion to meet it's target dates. Without the impetus of war, it's uncertain whether or not Speer would have been put in charge to reform the economy, or whether or not the German economy could have survived the weapons program without raiding the European continent for assets, as they did in the original timeline.

In short, just like so many other “invincible” Wehrmacht plans and weapons systems, the Z-Plan does not hold up to scrutiny as a war winner. With no immediate war need to concentrate on escort production, the number of the RN and USN capital ships increases dramatically. The delayed start means more capital ships for , and at least one capital ship for the Dutch. The best the Kriegsmarine can hope for is a repeat of WW1, where they act as a fleet-in-being across the . The most likely result will be a death by degrees as allied navies destroy the fleet piecemeal. With Teutonic efficiency and precision, the Germans will have expended vast resources on a force structure that fails to win them anything. Just like in real life.

The Great Ships: British Battleships in WW2 by Peter Smith

Posted by GruntyGinMan at 3:16 PM

did you just copy it out of the book? lol