Got my new backpack, a ULA Catalyst in the mail yesterday. I decided to take it out on a 8 mile loop at Sky Meadows State Park, which at $3 is a huge bang for the proverbial buck(forgetting for the moment that I already theoretically own it as a resident of Virginia). As per SOP, I took the only reliable hiking partner...Daisy the Combat Puggle.
After we got there we went walking up the first hill and started to go past a man and his Lab who were heading the other way. As we went by the man had his dog sit still and I tightened the reins on Daisy...who subsequently managed to yank free while she jerked forward to investigate the other dog. The other dog looked as if he bit Daisy in the ear, and suddenly Daisy let loose a wolf growl and snarled. I had to pick her up and move her(upon inspection her ear was wet but no marks or broken skin). Daisy isn't too good at reading the body language of other dogs. I had to run her through her "tricks for treats" routine in order to calm her down and concentrate her mind.
We continued on our trek and after we had looked back and were on the last meadow before the parking lot Daisy suddenly tried to get into the tall grass off the trail and froze. She wasn't chirping or charging forward like she saw an interesting animal, but as we made the last rise I saw what she had smelled(and apparently decided to pass on making her usual chirping mania)
Free Range Moo Cows! 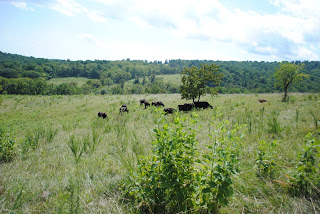 Posted by GruntyGinMan at 3:40 PM