Went out to Shenandoah National Park yesterday to try to hike out to Overall Run Falls, the tallest waterfall in the state. At a mere 90 feet off the ground it doesn't compare well to, say, Yosemite Falls, but I was interested in seeing it. I talked my sister into coming and bringing along her dog.

Unfortunately there was a haze over the valley that made the overlooks not as pretty as they could have been. According to a park ranger the haze was a result of pollution from the Midwest. Then when we got to the campground that was the starting point for the 6.5 mile hike we found that it was closed(gate to Skyline Drive closed) so we moved on to the next point. After some discussion we decided to try to hike in from there instead of Matthews Arm campsite, basically turning
a 6.5 mile hike into a 10.5 mile hike.

About 2 miles in the dog was ready to call it quits. I guess hiking in the mountains is much different than once or twice around the block at my sister and mom's house. Dang dog was a tick magnet too, which led to the hilarity of my sister having to put the dog in a sleeper hold on some asphalt while I picked out half a dozen ticks in her crotchel region. Good times.

I want to do it again! 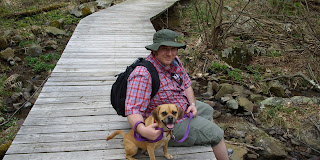 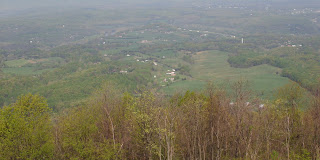 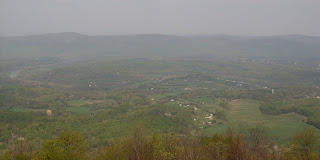 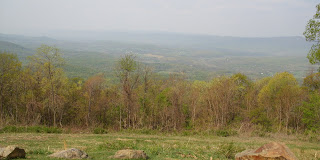 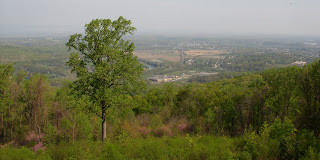 Posted by GruntyGinMan at 5:31 AM

OMG you wrote a real blog post! How exciting! :P

Love your pics! Must've been a great view to keep you company as you hike!