One good thing about working the graveyard shift is that when the weather is nice you don't have to be inside at work like all the other schmucks(or in the case of one person I know, defending his thesis). Today I went to Shenandoah National Park again. First I went to Hawksbill Summit, which is the highest point in the park. I was gasping and wheezing like an asthmatic puggle, regretting the high altitude steep slope. A hiking group went by me in the other direction, and one of the people in that group said "don't worry it gets easier".

She looked like my grandmother with more gray hair.

Anywho, finally made it to the top. View was gorgeous. One of the things city folks like myself notice is how damn quiet it is. Quiet Quiet Quiet. There would have been more to explore at the top by a big section was taped off for Peregrine Falcons. Stupid endangered species. 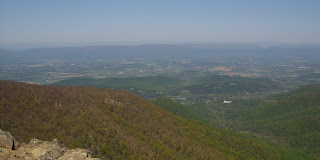 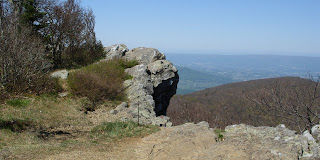 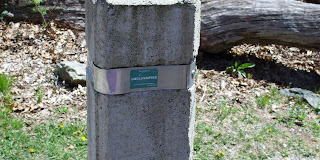 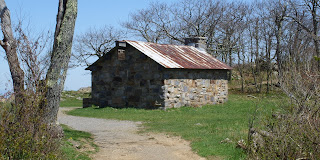 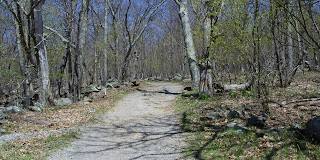 After that I went on down to Camp Hoover, via the Mill Prong Trail. Camp Hoover is also known as Rapidan Camp. It was a presidential retreat built by(you guessed it) President Hoover. It was there Hoover and the Prime Minister of the UK hashed out the horrible scrapping and neutering of reasonable reduction in sizes of the major navies.


Trail is a 4 mile round trip with 3 stream crossings each way(this is important later on). During the first third or so I ran into two old guys, Bob and Jack(and Jack's Black Lab, Bonnie). Jack invited me to "sit a spell", mostly, I think, because he wanted to pick my brain about my VFW hat. Jack turned out to have served on the USS Richmond during WW2, which ran into a bit of trouble at one point (minor difficulties, as Jack put it). Bob worked in the Norfolk Naval Yard during WW2, "Fighting the war in the Norfolk Theater of Operations." My Grandpa says the same thing about Korea and Chicago. Jack warned me that the final stream crossing was tricky because of the arrangement of the rocks. He's old, so what the Hell does he know?

Well the trail at the third stream crossing kinda peters out, it isn't real clear where you're expected to cross. I picked what I thought was the best arranged rocks, and nearly slip and fell to my death. After I went down to look at the camp I decided to try crossing at another point. I got about halfway across when I determined that it was a worse choice than the other spot. I decided to use my fancy-schmancy GORE-TEX boot and step on a rock that was about an inch underwater.

Well, now I was up to my knees in water. What the hell, might as well just slog across. My feet were drier than I thought they would be though. Guess GORE-TEX really works. After I made my way back to my car I took the backroads back to Fairfax. I'll definitely be doing this again.

(Blogger seems to be limiting my photos today. I have a bunch more on my FB page)
Posted by GruntyGinMan at 4:46 PM