Went out to Shenandoah National Park yesterday with a plan for a simple out-and-back to the top of a mountain called Mary's Rock. When I got there the entire Eastern slope of the range was covered in mist and fog. 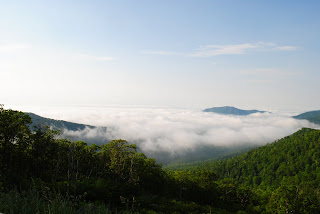 But since I was going to be hiking on the Western slope this wasn't much of a problem. I parked at Jewell Howell Overlook, hopped on the Appalachian Trail, and started North. After about a mile i started to hear voices, causing me to stop, look around furiously, then continue. When I reached a AT Shelter I noticed that someone was still in their tent(I found this odd as it was after 0900, well into the day for long distance hikers) and decided to sit a spell while perusing the shelter registry. 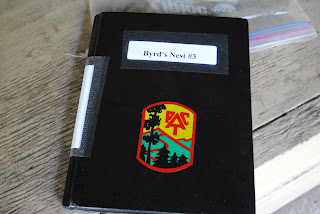 Shelter registries along the AT are suppose to be places where you just sign your name (or "trail name") and move on. Most of them include tidbits about the area(e.g. "saw bear") as well. This one included about a million stories about Jesus, one two page Star Trek fanfiction, at least one screed about how Muslims are taking over the country, and finally someone advising not to use the shelter, as he had had a bad acid trip and thrown up in it(bears might be attracted).
About the time I finished my entry two people came out of the woods from the direction I had come from. One was an older guy about my Dad's age(he was 55 if he was a day) another was a younger woman about my age. The girl was going to grad school shortly and the older guy taught kiteboarding(after working at CSX for 30 years). I had made the leap that it was a Dad and daughter team doing a big loop, but it turned out that they had met at a kite boarding class 0_O.
Made my way to Marys Rock, scrambling to the top. 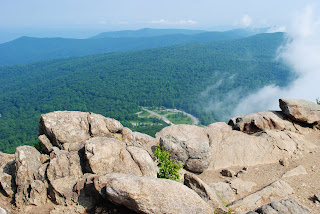 That cloverleaf is the Thorton Gap entrance to the park. After a few more pictures I climbed down and head back to the AT, set on returning to my car. I somehow blew right past my turn off and kept going...until I stepped onto the Thorton Gap parking lot. I was pretty displeased with myself. I turned around and headed back.
On the way back I saw several people on the trail, including a woman about my age with a extremely overweight Chihuahua. She looked like she was doing a long distance hike, and I couldn't help but notice the tent on her pack looked like it was the one I saw set up at the shelter. The Chihuahua wasn't friendly. Considering the number of people I was seeing it was clear that people were starting to arrive en mass for the long weekend. I also probably saw about a dozen RVs as well on the road.
As I approached the overlook where I had parked my car, an older(and extremely heavy) couple stared at me as I came stumbling out of the woods. You'd think they had never seen a hiker before.
Posted by GruntyGinMan at 9:26 PM