So yesterday I went back to Shenandoah National Park, this time intent on taking what's known as the "Camp Hoover Loop". I visited Camp Hoover last week, but only went out and back, for a grand total of 4 miles. I decided I would do the loop this time, for about 7 miles or so. I took my sister's dog on a playdate with me. She(Daisy) was so excited!
Met a few people on the first 2 miles and NO ONE the last five. For about two of those last five we were walking on a ridge near a ravine. The condition of the trail was such that it was clear it was rarely used(at least compared to the first two miles, which went to Camp Hoover and back to the road). Daisy's excitment rapidly waned as it gradually dawned on her that this trail was going on...and on...and on... She was soon walking exactly behind me exactly 2 feet behind me. Trudging along like she was on the Bataan Death March.
The views from the ridge were breathtaking, and you had a nice breeze hitting us. 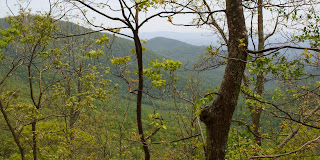 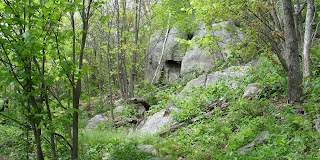 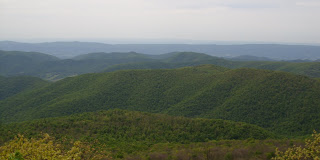 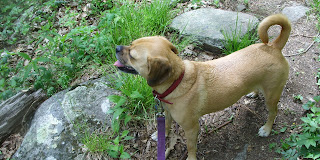 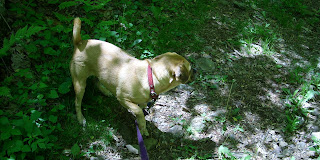 The trail started at 3200 ft, went down to 2200, then went UP to 3800 ft before easing down to 3200. More than once I would break out my map, then my GPS, and curse. Whenever we stopped for a break Daisy would drink her water than keep an alert watch on the woods. We didn't see much in the way of wildlife, except at the end as we approached the car...
She damn near pulled my arm out of my socket.
Posted by GruntyGinMan at 5:19 PM