Today I went out to Big Devils Stairs in Shenandoah National Park. I decided to take the combat puggle with me. Before I left I loaded down my Kelty Coyote backpack to the point that it weighed 30 lbs as part of my physical conditioning plan. Realizing that the pack now weighed as much as Daisy, I harnessed her to it so I wouldn't have to worry about holding her leash.
I did not care for the hike. Simple put...there was nothing special about it. The Falls were completely dried up, probably thanks to the drought we've been having. Daisy turned out to be able to pull along a 30lbs backpack with ease when I set it down. Damn dog is RIPPED. 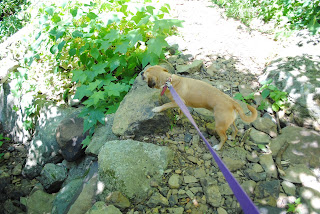 Anywho, as I moved back to the car we stopped at Gravel Springs Shelter. Two long distance hikers, Walking Wounded and Two-Dog were breaking camp as we arrived(Walking Wounded was a female 20-something wearing a SPCA tee shirt and wanted to take a photo of Daisy. She was taking a picture of every dog she encountered on the trail). WW and 2Dog related that the night before they had had one hell of a wildlife encounter. Late the previous night they(and other hikers in the vicinity of the shelter) woke up to what sounded like a baby crying. Everyone in the area went out into the woods, flashlights in hand, looking for the baby. It was a wounded Fawn. Before they could even approach the Fawn a black bear appeared and dragged it off deeper into the woods. Circle of Life.
Daisy got some water and rested at the shelter while I read the registry. After adding my own entry we headed home. When Daisy is laying down with her head up she looks like a Sphinx. She spent most of the ride back curled up, making her look like Falkor the Luck-Dragon...which is a probably meaningless comparison to most people out there.
Happy 4th of July Weekend everyone! I'll be working.
Posted by GruntyGinMan at 4:12 PM

you took the combat puggle again? what happened to getting your own pup?

*sigh*...night I got back Willy the cat was headbutting me furiously being friendly. He did a few slips(a leftover from his stroke) and I realized that if I got a dog it would cause a marked decrease in his quality of life.